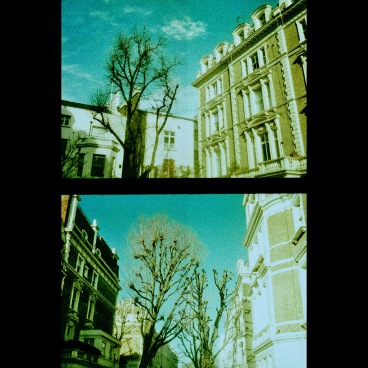 It’s almost like being born again; with no artifice, no fanfare. The scheduled howl of burning rubber announces the start of a new chapter. I’ve scrapped the previous one, archived it – twenty years worth of cute and harmless little events. None of it really matters anymore. There is a new world ahead of me now. A new life that has come to get me, challenge me, surprise me, perhaps bore me. I am alone, but not afraid. I am curious, and ready for whatever comes next.

Clanricarde Gardens, dead end street, W2. They replaced the carpet recently. Badly, it seems. There are gaps here and there. Nail pops. By the sound of squeaking and creaking it feels like the floor is sinking under you. Still, it is nice to walk on brand new plush flooring. An unexpected little pleasure in a house that otherwise feels like it’s falling apart.

Bruno unwraps a chocolate bar and with his huge fingers starts folding its packaging carefully, with solemn precision, until it’s the size of a stamp. Perfectly folded around itself like some kind of origami trick. He quietly places the wrapper button inside a tiny shoe and yawns.

Bruno reckons that this building was once, not that long ago, a third-rate dump where one could find refuge from a messy night. Sweaty walls, tired and sleazy, seem bored to death by the lives of those living within them. The cream coloured wallpaper, still somewhat bright, is quietly peeling away up there where it meets the ceiling, slowly exposing a fearful family of miniature bugs. For years, these walls have witnessed hoards of nomads passing through, coming and going every few weeks or months. Walls that never ask questions. Merely partitions that, day after day, patiently perform their role as voiceless allies in our inhabitation; standing for us in sympathetic imitation of our own restless being.

Bruno lives in one of the rooms downstairs. Every now and then, and always without warning, he comes up late at night to talk endlessly whilst we listen to music. Almost every time he brings whatever lost property he’s found that day, discarded gifts from the guests of the big hotel where everyone in the Staff House works. From toys and silly souvenirs to food and drink. A bottle of expensive wine, maybe some sweets from one of those fancy street markets, all of it left behind by another one of our affluent guests.

My room, like most other rooms in the Staff House, does not feature a fridge, so we keep the white wine cool by placing it in cold water in the sink by the bed. During cold weather we can also leave it out on the windowsill, where recently I have been keeping pints of milk. We eat and drink until the early hours, laughing at everything and listening to his most recent musical acquisitions, mostly jazz, no vocals. Bruno sits heavily on the bed like a totem, contentedly silent for the most part, and occasionally exhibiting his wonderfully Argentine cynicism alongside a big, toothless grin.

In a strange way, Bruno and I share the same code. But he can also be inscrutable, somewhat intimidating. You can easily recognize the Italian shade of his Argentine character; an almost offensive sense of humour, and that passionate, controlled anger. Bruno does not lead what you would call an ordinary life. He sleeps during the day, and lives at night. He once said that this has helped him stay sane after all these years in London. Night softens the rough edges of the city, he says, and it puts everything in its right place. Bruno seems to regard the day life as a battle, a noisy and exhausting conflict during which life is squandered without care.

His shift in the hotel starts at 4pm, leaving his post promptly at midnight, when he heads to central London. There he works all night as an illustrator and cartoonist for some big film company. Bruno claims to be behind some of the biggest productions of animation movies over the years, and I can see why. His drawing skills are like nothing I’ve ever seen before. Sometimes, during our conversations sitting on the floor, drinking wine, he starts scribbling away on the corners of used tissue, or on my sketchbook, creating with only a few traces perfect animations of little creatures, moving graciously as you flip the pages.

Bruno does not own a mobile phone, nor talk to many people most days, besides me and when he has to at the hotel. I know almost nothing about his past, but I heard that this has been his life for approximately the last ten years.

That’s ten years here, in the Staff House, in a room that’s similar in size to mine, a 90 square feet box room. There are a total of 15 of these rooms in the whole house, with two communal toilet facilities, one on the ground floor and one on the top. In my case, I have to either go up or down two floors. No one looks after the toilets, but one gets used to the filth. Generally the one upstairs is slightly cleaner, although a severe blockage and subsequent flooding has made it unavailable to use for a few weeks now.

The layout of the rooms is pretty similar throughout the house. A single, almost toy-like bed is tucked against the wall in one corner, often near the window. A very narrow wardrobe usually placed by the door also works as a cupboard and storage space for whatever you do not want to keep on the floor. A gritty old sink is conveniently located next to the bed – a multi use facility of sorts which on lazy nights works as an improvised urinal for when the communal toilets feel either too far away or too menacing to use.  The sink is a key component of the room, as here’s where you also wash, shave and clean, and when filled up with water, where you keep certain items cool. It can be a problem however, when the drain doesn’t drain, which happens rather frequently. And as we all soon learned, no over-the-counter chemical can unclog these sinks. Therefore, until some guy from the hotel maintenance team is free to come over to the house, you may have to spend a few nights sleeping with your head in uncomfortable proximity to a combination of hair and unidentified residue floating in a stagnant pool of dirty water. A grotesque baptismal font of sorts to anoint our bodies and thoughts, to perhaps remind us that it’s okay, it’s fine, that we’re lucky that we can even be here, mixing up with the well-to-do, in £1,300-a-week-averange-rental-value Notting Hill.

Due to the lack of space, chairs, desks or tables are rare. I have only seen one in the whole house, in Giuseppe’s room upstairs. This means that all the indoor entertaining, socialising, eating and drinking, has to happen either on the floor or on the bed. Not much cooking will take place here though. There is no kitchen in the Staff House as the hotel management strongly encourages everyone to eat in the hotel Staff canteen, approximately a 10 minute walk away from the building. A vague rule imposed by the management when you first move in advises against any ‘hot cooking’ in the rooms, as to prevent the mice infestation (the true tenants of the Staff House) to get worse and also to avoid the hyper-sensitive fire alarm to go off every few minutes.  Eating in the Hotel is free but needless to say, not many tenants care for this and microwaves and kettles are present in every room, often placed in the most unlikely of locations. Any free space will do, whether it is under the bed or in the wardrobe, or simply on the floor by the door, as that is often the only place where one can find a socket to plug it in.

I’ve learned that, when you’ve only had a microwave and a kettle to make meals for a long period of time, and you’ve reached your limit of pot noodles or 4-minute lasagnas, you will come up with great and innovative ideas to improve your cooking. A few days ago, Giovanni upstairs showed me how he often pours boiling water from his kettle into a Thermos flask filled with small soup pasta, leaving it to cook for a few minutes. The thermos should be able to keep the water boiling hot for a good 10-12 minutes, enough time to make the pasta edible. Of course, all of this ‘illegal’ cooking causes the fire alarm to go off every few days, often very late at night or in the early hours of the morning, when the night workers come home from the hotel. When the excruciatingly loud alarm goes off we all have to leave the building in our pyjamas until someone, usually Bruno, climbs up a step ladder and resets the machine with a ball pen.

An old school payphone located in the hall outside my room suggests that Bruno is probably right in his guess that this was once a cheap hotel. The coin-operated machine still works and it is often used for hours on end by people talking to their families in some indecipherable language. The time difference with the country of origin of most of the people living here means that these loud conversations end up happening all night until the early hours.

And despite all this, the Staff House can be a quiet place to live, tucked away at the back of what could be regarded as the perfect example of Regency architecture, just one more building in a row of identical buildings in a tidy cul-de-sac just off Notting Hill Gate. Here, surrounded by the noise and the wealth, the urgency and the anonymity of central London, an odd mixture of individuals have found their home, strangers in a strange land. Only temporary for many, but a home for years for some – a strange extension of their eccentricities but also of their homesickness, and their loneliness.

Singer-songwriter and illustrator from A Coruña (Spain) based in London since 2009.